We are a highly rated home inspector company serving Portage Park and we have satisfied customers in the area. You can see how we stand out from our competition by viewing a sample home inspection report and also learn more about our services here. We would gladly connect with you to learn about your home inspection needs in Portage Park.

Portage Park is located on the northwest side of the City of Chicago, Illinois, and is one of 77 officially designated Chicago community areas. Portage Park is bordered by the community areas of Jefferson Park and Forest Glen to the north, Dunning and the suburb of Harwood Heights to the west, Irving Park to the east, and Belmont-Cragin to the south.

The area is notable for its Six Corners outdoor shopping district, centered at the intersection of Irving Park Road, Cicero Avenue, and the diagonal Milwaukee Avenue, the Portage Theater, and for its namesake – Portage Park. The name of the park was taken from the major portage linking the Des Plaines and Chicago rivers along what is today Irving Park Road. The area was so swampy that in wet weather, Native Americans and trappers were easily able to paddle through the area in either direction without leaving their canoes.[2] In those days, the Des Plaines was perhaps the most significant way to Illinois, and then on to the Mississippi (and to return).

Portage Park has the largest Polish community in the Chicago Metropolitan Area according to the 2000 census. Portage Park is home to the Polish American Association, the Polish Jesuit Millennium Center, the Polish Army Veterans Association in the beautiful building of the former Irving State bank, in addition to the multitude of Polish shops and businesses throughout the district. One of the area’s parks is named Chopin Park after Frédéric Chopin, Poland’s most famous pianist and composer. 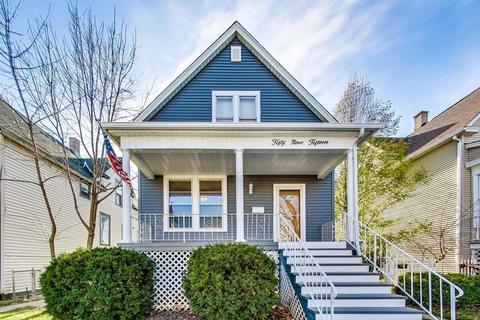