We are a highly rated home inspector company serving Rosemont and we have satisfied customers in the area. You can see how we stand out from our competition by viewing a sample home inspection report and also learn more about our services here. We would gladly connect with you to learn about your home inspection needs in Rosemont.

Rosemont is a village in Cook County, Illinois, United States. Located immediately northwest of Chicago, as of the 2010 census it had a population of 4,202. The village was incorporated in 1956, though it had been settled long before that. While Rosemont’s land area and population are relatively small among municipalities in the Chicago Metropolitan Area, the village is a major center for commercial activity in the region and is a key component of the Golden Corridor.

Due to its proximity to several interstates, O’Hare International Airport, and downtown Chicago, it has emerged as a significant edge city and entertainment district, with corporate facilities, millions of square feet of office space, nearly 50 restaurants, 15 hotels, the 840,000-square-foot (78,000 m2) Donald E. Stephens Convention Center (home to conventions and trade shows), the 16,000+ seat Allstate Arena (home to the Chicago Wolves, Chicago Sky, DePaul Blue Demons until 2017, and concerts and other live entertainment events), the 4,000+ seat Rosemont Theatre, the 130-store Fashion Outlets of Chicago, the Rosemont Stadium (home to an outdoor collegiate-level baseball stadium and 140,000 sq ft indoor sports dome), and the entertainment complex Parkway Bank Park, which features restaurants, entertainment and a large common area used for summer concerts and ice skating in the winter.

Rosemont is near Rivers Casino in Des Plaines and additional hotels, offices, restaurants, and corporate facilities in the adjacent O’Hare neighborhood of Chicago and nearby suburban communities such as Des Plaines and Schiller Park. 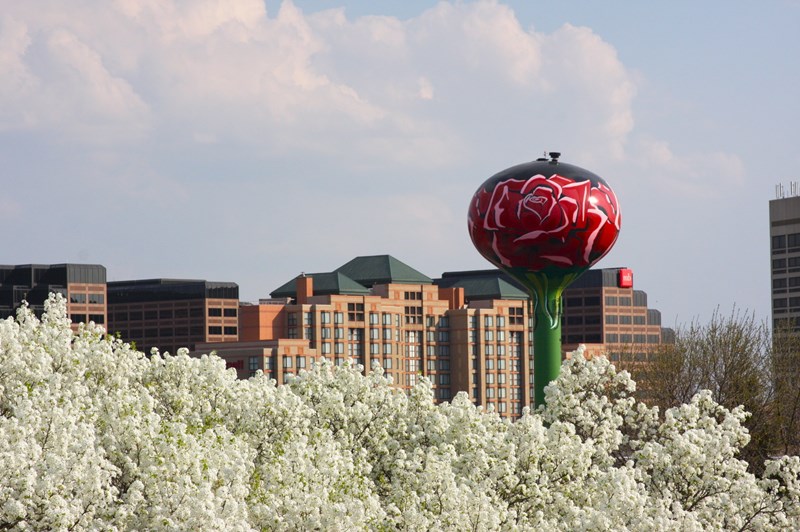